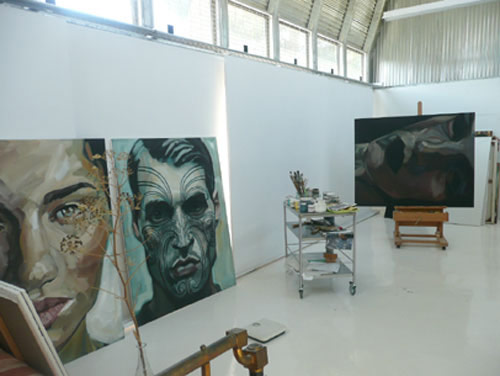 “My paintings are my world, my fascination for people, plants, animals and colour. They are how I perceive things with all their energy.” Belinda Eaton, 2005

Schooled in Franco’s Spain, college in London, early work in New York, lost in rural France, found in Pakistan, now living and working in Andalucia. Belinda’s nomadic existence has allowed her to always be perceiving life around her with the fresh enthusiastic eyes of the newcomer seeing things for the first time, resulting in the unique perspective of what is “Belinda’s world”. A world of colour, vivid characters, swirling spaces, uncontained energy that can’t be trapped by the limits of the canvas, images constantly on the move, living life, dancing, drinking, and eating.

Within the canvas there are no boundaries of subject, perspective or reality, just the borrowings from all that she has been exposed to. The chameleon she watched change colour and the washed up locust she ate in Africa, the wailing witches who counted their age in potatoes in a small Moorish village in Andalucia, the art education at St Martins school of Art in London, the crazy nightlife of the club years in New York and graffiti and rap, growing vegetables according to the moon and contemplating with French farmers, being a western woman in an eastern world and truly learning to see with a fresh eye and mind in Karachi. Now back to early influences in Spain. Passing for a few years through the organic structure of the Catalans in Barcelona, but finally seduced by the Wild Wild west of the desert of southern Spain. Building a studio amidst the surrealism of forgotten Clint Eastwood spaghetti western sets,in a landscape reminiscent of the lunar surface… scorpions, snakes, olive trees, wild dogs, the sky and stars as companions.

Belinda Eaton is a British artist born in the Sixties in Mombasa, Kenya. She lived in London, New York, France, Karachi, Barcelona and is currently living and painting between England and Andalucia, Spain.